Agius is swimming from Sicily to Malta to raise awareness for Wave of Change Malta, which organises the ‘Clean Seas Campaign’.

‘Let’s Chat’ sees Coryse Borg having a light-hearted video chat with number of personalities in their own homes.

In this episode she has a chat with swimmer and all-round nice lad Neil Agius who is swimming a whopping 95 kilometres over 33 hours of nonstop, unassisted (this means that at no point will he be allowed to even touch the boat which will be accompanying him) swimming from Sicily to Malta.

He is doing this as part of the Wave of Change campaign that empowers everyone to take action in their everyday life to reduce the amount of plastic that ends up in the seas.

Neil says that training is the hardest part of all of this; he swims six times a week which includes waking up at 1.00 am on Friday morning and going swimming for 9 hours… and then doing it all again on Saturday.

“Its not easy, physically and mentally,” Neil told Newsbook.com.mt,”This year I had some of the toughest swims. A few weeks ago, I was starting a seven-hour swim at 2.00 am, which will obviously be pitch black, and within 20 minutes I got stung badly by a jellyfish on my chest, since visibility is close to zero. It did get me uncomfortable for a good hour. Then I told myself to get over it, and after that, I made it through the whole swim. It’s one of the most amazing feelings – swimming in pitch black for over three hours and then the sun slowly comes up… breathtaking.”

We wish Neil the best of luck for his endeavour!

By the way, that woofing you hear in the background of Neil’s interview is none other than his lovely dog Goose, who often accompanies him on his clean-ups. 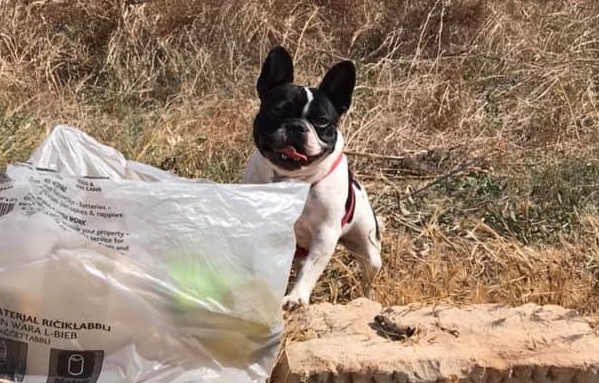 More information on Wave Of Change Malta may be found here.

This article was originally published on Newsbook.